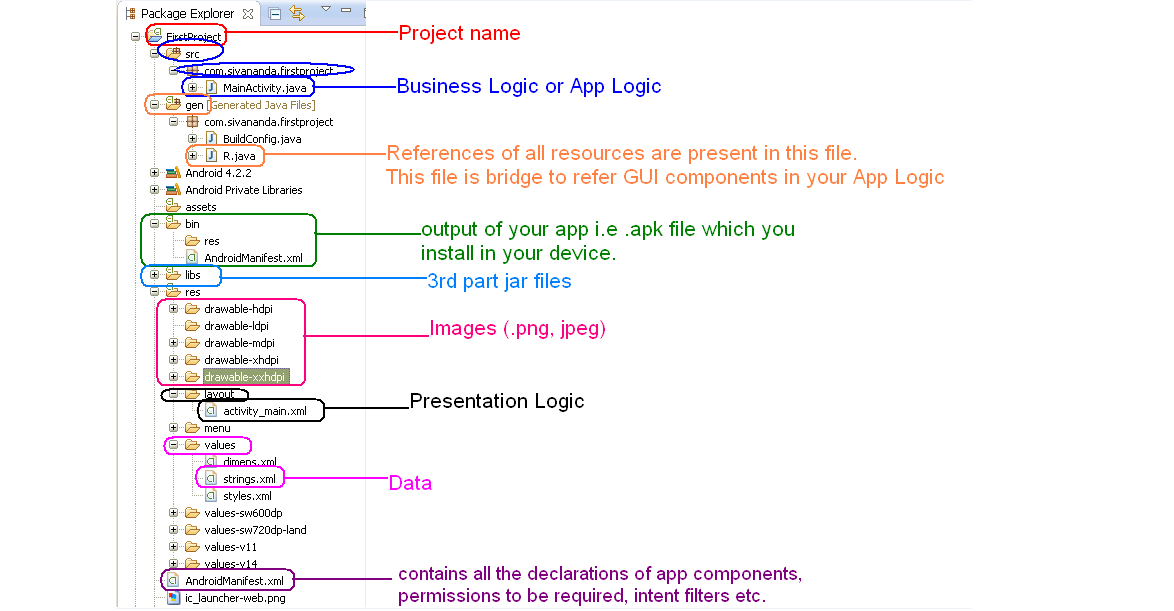 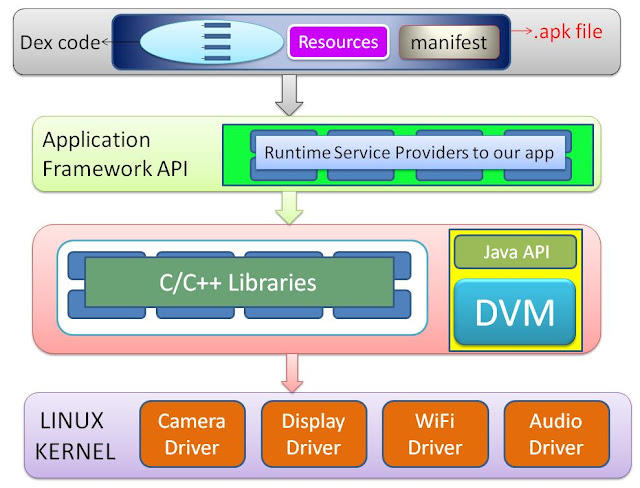 Explaination of each Layer from top to bottom

1) Applications :
This is the top most layer of Android Stack. The application which you developed and installed sits in this layer along with the existing predefined        applications like calculator, dialer, Sms application etc.
Your application is written using Java programming language syntax which is finally translated to .dex(dalvik executable) format. All the dex code with data and manifest file are packed into .apk(application package) file. Hence a .apk file is nothing but an application in Android. Our application then interacts with its neighbouring layer i.e Application Framework layer.

2) Application Framework :
This layer provides services at runtime to your application. This layer contains a set of Managers which are service providers to your application. The following are the Managers that exist in this layer.
1) Activity Manager
2) Window Manager
3) View System
4) Resource Manager
5) Package Manager
6) Location Manager
7) Notification Manager etc.
For example :  Your application can be displayed on the Screen by getting Service from Window Manager. Similarly your application resources are managed by Resource Manager. your Activity's Lifecycle is managed by Activity Manager etc.
NOTE :  your application can access these Managers directly in your code by using getSystemService() method as follows :
Ex : WindowManager wm = (WindowManager) getSystemService(WINDOW_SERVICE);

3a) DVM :
DVM stands for Dalvik Virtual Machine. DVM runs the application code which is in dex format and finally translates it into Linux format. DVM provides the Runtime environment for your application along with Java APIs.
3b) Java APIs :
These APIs are essential for the interpretation of our Application by DVM. Here we have Core Java libraries and also Android libraries that are required for proper functioning of DVM.
NOTE : DVM and Java APIs together is called Runtime.

4) LINUX Kernel :
This is the bottom most layer which does Process management, Memory management, File management etc. Kernel interacts with the Drivers by taking the calls from DVM which inturn communicates with the appropriate Hardware device. Hence Android relies on the modified version of LINUX 2.6 for all OS services. 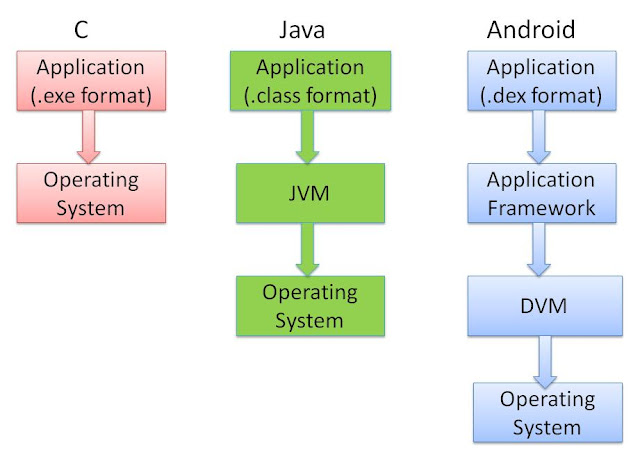 Posted by Sivananda at 11:56 PM No comments:

Objective of Day
1) Why should you learn Android??
- to develop Applications for Mobile Devices

2) What is Android - informally
- Solution given by Computer Technology for the problem faced by Communication Technology. 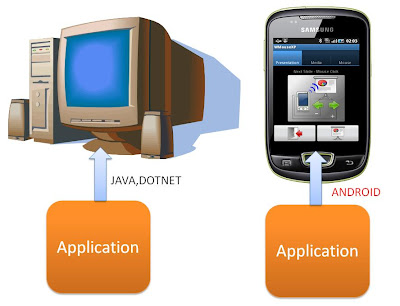 
Why Android?? - Mobile Application Development
What Android?? Solution given by Computer Technology --> for problem faced by Communication Technology 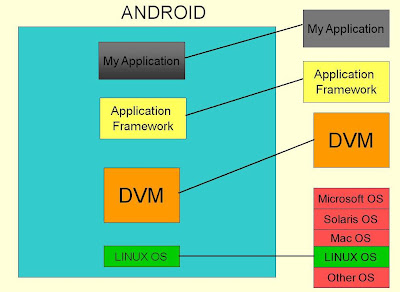 --> Market of Android :
huge scope - Sale -  8,50,000 Android Mobiles are activated per day.
No Licensing fee (or) no Certification required - Google Play
You can start your own company without Software team initially.

Posted by Sivananda at 11:55 PM No comments:

Components of an Android Application :

Service :
An Android Application has to perform some long-running operations like playing music, downloading a file which doesn’t require the User Interface (screen) as they work in background. All these tasks are defined by a class called ‘Service’.

Broadcast Receiver :
Many events may occur in the Mobile such as Battery Low, Camera has taken a picture, an SMS arrived, WiFi has been detected etc. Then your Application has to perform some action for those desired events. Then BroadcastReceiver class is used to handle those events which the Android System broadcasts.
Posted by Sivananda at 11:54 PM No comments:

--> Is it an Operating System alone??
ans) No. If it is an O.S, it has to support 2 or more Programming Languages. But Android supports only Java.

--> Then What exactly is Android??
ans) Android is a Single piece(Applications + Framework + Libraries + DVM + LINUX Lernel) all combined together. All the above things constitute a software stack.

--> Why Android??
ans) To Develop Applications for Mobile Devices.

--> Is Android Platform Independent??
ans) Android itself is a platform :-)
So there is no meaning in discussing about platform independence.

--> Android is for
1) Mobile Application Developers - who want to develop innovative applications
2) Mobile Companies - who can get Android at almost no cost(Android is open source & free) and encorporate it in there Devices.
3) Mobile Users - who can easily get their requirements to be solved by consulting Mobile Application Developers & also can get the built in apps to be replaced by the other apps.

--> Finally, Android is a gift given by OHA(Open Handset Alliance) led by Google for the above 3 categories of people.

--> This is the introduction of Android. Hope you got atleast some idea about What is Android and Why Android. Good Day :-)
Posted by Sivananda at 11:51 PM No comments:

Computer is used for problem solving.
But in today's advanced world, as technology is at the peak, almost all problems can be solved using the Mobile devices.
Previously you have programmed(written applications) to a computer using C,C++,Java,Dotnet etc
now let us start programming(writing applications) for a Mobile Device.

Limitations for programming(application development) to a Mobile Device :

Mobile Device is a pure hardware.
It requires a System software to function(i.e Operating System)
So previously there are Symbian, BlackBerry, Windows Mobile, Apple IOS for Mobiles.
But All of them are proprietary i.e
1)    Their source code is not available open to all & one has to purchase the SDK of         the above O.S to get into the Application development.
2)    Finally The Application Developers are not given the liberty to stretch their innovation & build the applications with their flying thoughts.
 A community under the roof of Google known as OHA(Open Handset Alliance) thought to come up with a open source platform which encourages the Mobile Application Developers to put all their innovative ideas into practice.
So at last They unveiled the powerful, open source platform – ANDROID
ANDROID gave the solution to all the problems faced by the Mobile Application Developers



In Mobile World, There are 4 communities of people :

Each community has its own problems.
A great solution to the problems faced by these communities is ANDROID.

Posted by Sivananda at 11:50 PM No comments: